The roads around Sleepy Hollow and Tarrytown are packed this time of year as folks from all over make the trek to these river towns in search of The Legend of Sleepy Hollow. I wonder if Washington Irving knew that this place he described as “drowsy” and “dreamy” would become the destination of choice for travelers on the lookout for that “ghost of a Hessian trooper, whose head had been carried away by a cannon-ball, in some nameless battle during the Revolutionary War, and who is ever and anon seen by the country folk hurrying along in the gloom of nigh, as if on the wings of the wind.”

Before North Tarrytown changed its name to Sleepy Hollow in 1996, the name was more associated with a region than an actual village. The Pocantico River Valley, christened long ago by the early Dutch colonist Adriean van der Donck as “Slapershaben”, or Sleeper’s Haven,  was acquired by Frederick Philpse from the Wickquasgeck native peoples around 1680. In 1685, Philpse completed construction of the church which would be known in his time as The Dutch Reformed Church of Philispburg Manor. A Royal Charter granted by the British made him the first Lord of the Manor, but this was by no means a British estate. Dutch was the predominant language here until 1800. Lord Philipse enticed Dutch settlers to clear land and grow the wheat that would make his gristmill the heart of his agrarian enterprise. It was his first wife and business partner, Margaret Hardenbroek who encouraged the building of the church to provide spiritual sustenance for the tenant-farmers. The church dates its origins from the bell that Margaret had cast in the Netherlands and shipped back to the Manor in 1685. Engraved with the words, “Si Deus pro nobis, quis contra nos” – If God is with us, who can be against us? – it still rings the call to service on Sundays. Frederick’s second wife, Catherine Van Cortlandt Derval, provided the second oldest object – a 17th century table from the Netherlands, still used today for communion services. Catherine was the first patroness of the church, established the first regular pastor for the congregation, and supported the work of the church throughout her lifetime.

Such were our beginnings as a church that stands on a hill of bones embracing the remains of souls that may go back as far as the First Peoples who lived here 3000 years before the Dutch arrived and changed their world.

Sleepy Hollow is a place of legends, many told beautifully by the Hudson Valley story-teller Jonathan Kruk in his book “Legends and Lore of Sleepy Hollow and the Hudson Valley”. Legends of the Lenape and the Dutch. Ghosts of the American Revolution. Places bewitched by more inhabitants than the occasional headless Hessian, one in particular who will become the most beloved phantom of the Old Dutch Church’s Burying Ground.

And so, at this time of the year, we can take on a playful attitude and welcome the seekers of the fantastic to walk through our burying ground in the safety of daylight where the stones of our spiritual ancestors reach out to our visitors, not to terrorize them, but to familiarize them with the kith and kin of the original settlers and their descendants.

In the shadow of this historic structure you will find the memorial stone for Jacob and Frena Romer who came to this land as indentured servants and many years later served a meal to Major John Andre before he was taken to Tappan and tried and hung as a spy. Van Tassels are in residence and the story of Cornelius, Elizabeth and Leah Van Tassel may provide a clue as to the identity of our ghostly Horseman. Abraham Martling, officer in the militia and leader of the “Liberty Boys” and possible inspiration for Brom Bones and his brother Isaac, called “The Martyr”, a veteran of the French and Indian War are buried on the East side of the church. Their father, Abraham Martlenghs, lies near Abraham. A deacon of the church and justice of the peace – most of his land would become the village of Tarrytown. There is no stone for Hulda, called Witch, but we are working on one because in truth she was a healer and a hero of the American Revolution who took up arms and died from a British bullet. And we can’t forget Colonel James Hammond who commanded the Westchester militia, hosted General Washington in his home,  and faced the business end of two British cannon when soldiers came knocking on his door in search of the General who had already made his departure. The epitaph from his headstone:

In October, the burying ground of the Old Dutch Church becomes a classroom and a moveable feast of brats, and dogs and pumpkin ale where parents sit with children amongst the stones to tell their own stories or share ours or remember the Legend that brought them here and the writer who lies just up on the ridge, on the edge of Sleepy Hollow Cemetery, looking down on us – in this place that enchanted him, Once Upon a Time. 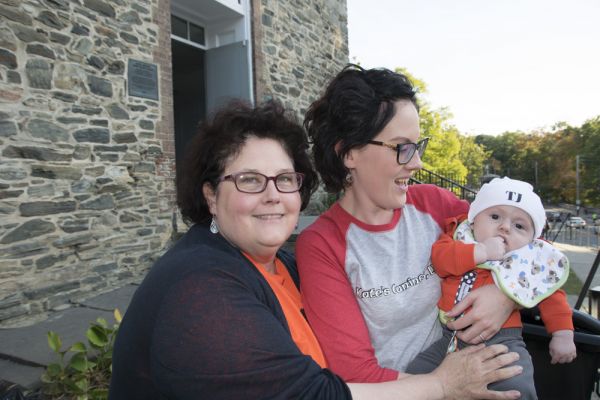 My grandson Tommy, his mom Kate, and me. Baby’s first Old Dutch Fest

All photos by Janie Couch Allen.

Daughter of a hula dancer and WWII vet. Born and raised on the East Coast and brought up by my Hawaiian grandmother. Mother of 2 married daughters and wife of a guy who still keeps me laughing after 37 years of marriage. Tutu to a lovely grandson! Docent at the Old Dutch Church of Sleepy Hollow - think Legend. Member of the Reformed Church of the Tarrytowns. View all posts by Deb Kuupuaonaona McCue